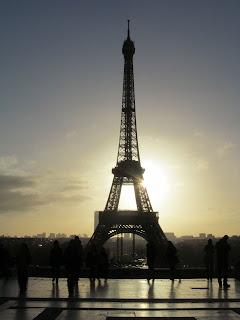 The United flight from Washington, DC to Paris arrives at 6:30 in the morning, a time at which, in late December, Paris skies are still pitch black and the only cafe customers are men taking their little cups of coffee at the counter.  By nine, the key to our friend's apartment retrieved, codes entered and small elevators crammed with suitcases, teeth brushed and faces washed, the desire to take a good long nap put on hold, we made it to Trocadero to see a blinding sun peeking out from behind the Eiffel Tower.  Ah Paris.

Being back in Paris as visitors was every bit as magical as I had hoped for in the long months since I paid big bucks for plane tickets for our family of four.  Even though many of our friends were off on their own holidays, Paris showed us her best face with relatively mild temperatures and relatively little rain that allowed me to walk the quartiers almost to my heart's content, replaying favorite memories and revisiting favorite haunts.  It was a greatest hits tour of Paris, a Paris where the sometimes frustrating rhythms and routines faced by residents were all but nonexistent.

There was one quick visit to the Orsay, newly renovated since our departure in 2011, a spin through Victor Hugo's apartment in the Place des Vosges to gear up for seeing the new Les Miserables film, and a morning at normally closed Musée des Arts Forains with Mary Kay of Out and About in Paris.  But mostly, I was in the mode of absorbing the sights, sounds, and smells of Paris -- the click made by a big wooden street door once the proper code is entered, the delicious odor of baking bread and roasting chickens, the white and black of limestone and wrought iron silhouetted against blue skies.  We had lovely meals at L'Entredgeu in the 17th and Abri in the 10th, ate more than our fill of fresh baguettes with salted butter, and went through carnets of Metro tickets like Kleenex.   There was delightful banter with a salesman at the Marché Saint-Pierre, Lebanese crepes at the Wilson Market, rides along the Seine on the 63 bus, and the musical sound of French being spoken ringing in our ears.

In the end, I'd say that Thomas Wolfe got it completely wrong.  You can go home again, as we did 18 months ago to the land of 24 hour drug stores, fresh bagels and hot salsa, lawns to be mowed and careers to be jumpstarted.  And to Paris too, our second home forever more, the only question being --how soon until we can go back?