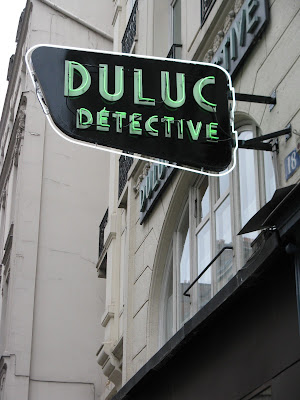 This sign had me at hello.  But was I in the San Francisco of The Maltese Falcon or in Paris?  It took me a minute but it all came back.  I was on rue du Louvre, the same street where Aimée Leduc﻿, heroine of mystery writer Cara Black's Paris-based thrillers, has her office.  Duluc/Leduc?  Coincidence?  I think not.
If you haven't picked up one of Black's books, I'd definitely recommend them.  They are fun, fast reads with lots of references to all kinds of  famous and out-of-the-way places in Paris, plus plenty of car explosions, lock picking, and general detective novel shenanigans.  The first one I read was Murder in Belleville (because it was in a stack of books gifted to me by someone leaving Paris) but I think it's probably better to start at the beginning of the Leduc saga with Murder in the Marais.
Posted by Anne at 7:55 AM

How funny! I've met Cara Black and a few twitter events, I need to delve into her books!

I love Cara's books! I have yet to read the last one, but I'm saving it for my next beach holiday (in January) when I like to catch up on my reading:)I wish I knew her personally: I would offer to proofread the French bits in her books:)

Fabulous! I am off to order the first one now! Merci, and have a wonderful weekend à Paris.

Anne, I am sure we've seen each other in the street. I feel like we're always walking the same paths... love this sign, too!

But i've never heard of Cara Black or her books - hurrah! I'll have to check them out!

Nope, it's not a coincidence - she talked about it when she was on the K&K podcast a few months back (episodes 338 & 339). You should check them out when you get a minute, they're very interesting, especially when she talks about how she does her research for her books!

I haven't read any of her books. I think I have to remedy that.

Ksam: Thanks for the tip. Unfortunately, I couldn't figure out how to listen to the episode. It says click on play button...but where the heck is the play button?!!

At least on my computer, the play button is located in between this sentence: "This episode was brought to you by the word "un meurtre" (a murder)" and the show notes!

You can also get them on iTunes - though I'm not sure how many episodes back it goes.

Interesting. I love Paris and reading and a good diversion. I'll have to look into these books. Thanks for the tip.

Thanks Ksam. I was able to download it from iTunes. It's nice to know my intuition was spot on!