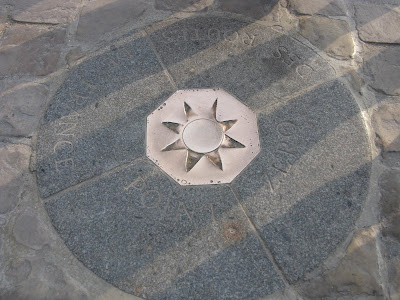 If you look closely, you can barely discern the carving on this compass rose that says "point zero."  ﻿ Stand on this spot in front of Notre Dame and you will be in the official center of the city of Paris, the point from which all distances to and from Paris on national highways are measured.  Forget that this spot no longer (if it ever did) actually marked the midpoint of population dispersion or the city's physical space.  It's all about the symbolic importance of the spot.   But here's a handy tip.  Street numbers in Paris use this as a reference point.  That is, a small number will be closer to this point than a high number, and that's true for both north/south and east/west axes.   After that, however, all bets are off.
Posted by Anne at 8:03 AM

Email ThisBlogThis!Share to TwitterShare to FacebookShare to Pinterest
Labels: things to do in Paris

How interesting! Thanks for sharing.

I like that the English bookstore, Shakespeare and Company, which is close to Notre Dame, has a bookstamp that says "Kilometer Zero Paris". I always ask them to stamp the books that I buy there because it makes the book seem a bit more special.

They used to call this "the center of the world".

I hunted for years to find this! Finally discovered it was usually mobbed by tourists!

I don't think I knew it existed, unless they mentioned it in The DaVinci Code. I sent your post to a friend whose daughter is modeling in Paris. She keeps heading to the wrong address so I thought she could use the tip about the addresses.

I'd have to agree with Starman - this is the center of the world! (Just don't tell the New Yorkers that...)