It's true: Paris is always a good idea 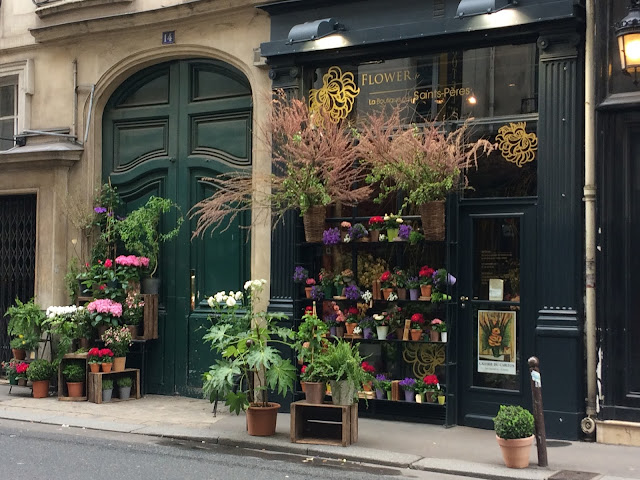 In the two years since my last post here, I've been back to Paris twice but on those occasions, it was only as a jumping off point to adventures elsewhere.  In each case, I landed at CDG in the wee hours and spent the day fighting off the haze left by a trans-Atlantic flight before heading out of town the next morning. And don't get me wrong, while each of those little visits felt like a good long drag of the drug that I've come to know as Paris, neither seemed worthy of noting here.

But on Sunday, May 7, after almost a week in Brittany spent hiking and hanging out at a friend's holiday home, I found myself in Paris at midday, without a trace of jet lag and my French language skills already firing on all cylinders.  Like so many of the days I had spent exploring Paris  -- while kids were in school and my husband was at the office -- I was on my own with no one to answer to but me.

And so I walked.  From the station at Montparnasse to the Jardin du Luxembourg, stopping only for a jambon beurre and a bottle of water to savor on a green lawn chair overlooking the fountain where little kids were pushing sailboats with poles and joggers attired in scarves were running their circuits. Down the Boulevard St. Michel and across the Seine.  By Notre Dame, where a line of tourists stretched the full length of the parvis.  Across the Seine again and along the quai, closed to cars but open to bikers and strollers. 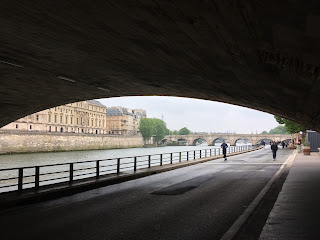 I stopped in at the Louvre for a special exhibit on Vermeer and at the Orangerie, a lovely little museum best known for its upstairs galleries featuring Monet's water lilies, but also housing the spectacular Jean Walter and Paul Guillame collection, some 150 works from the late 19th and early 20th centuries. Late in the afternoon, my wanderings took me back across the river, through the narrow streets of St. Germain des Prés, and then eventually back to my hotel near Montparnasse after stopping for a drink and a quick getting-to-know-you-in-real-life chat with Jennifer Greco, the author of the wonderful blog, Chez Loulou.

It was gray and misty, and in some ways, it felt like I'd never left:  the smell of fresh bread wafting out of corner bakeries; flowers for sale on the sidewalk; women bundled up in shades of black, gray, tan, and the occasional audacious pop of maroon or navy; the plain volumes of Gallimard imprints featured in the bookshop windows; the chestnut trees with their pink and white blooms.

But there were signs of change too.  My visit to the Louvre was delayed by two hours, the entrances to the esplanade, where preparations were underway for Emmanuel Macron's victory party later that night, temporarily closed off due to a security threat. The African trinket sellers had added selfie sticks to their collection of wares. And even into the evening hours, grocery stores and boutiques still had their doors open for business. 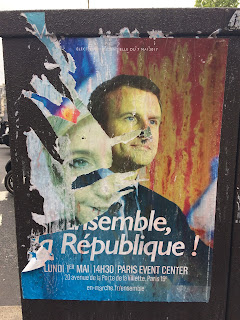 As a tourist, any deeper changes were opaque to me and it was the little things that counted. Early on Monday morning, I went in search of a pastry to savor before the flight home. The street cleaners were out with their tiny vehicles and green plastic brooms. City workers were taking down the market stalls along the Boulevard Edgar Quinet. I still didn't have correct change for madame at the boulangerie but that was her problem, not mine. As the airport bus headed out of town, I drank in the street scenes and just as we pulled out of Place de la Nation towards the Périphérique, I took one last glance back and saw the Eiffel Tower peeking out from low hanging clouds.

Years ago, a friend, whose career had included assignments in far flung corners of Africa and Asia, described coming back to the U.S. like putting on a favorite pair of old jeans.  The metaphor resonated upon our return in 2011 when we slipped back into the comfortable rhythms of our American life. But last week I realized:  if to me, DC is a pair of well-loved jeans, then Paris is the timeless little black dress hanging in the back of my closet. And it's good to know that even if I don't have a place to wear it every day, every now and then, I can take it off the hanger, zip it up, and it still fits perfectly.  And that is always a good idea.
Posted by Anne at 2:12 AM

I know just how you feel! I am looking forward to a week in Paris this summer, and I will be toute seule for half of it. I wish I could go back more frequently, but I'm always grateful for what time I had, and for what I may have in the future as a non- resident!

This is so funny. Just 2 days ago I was looking through my blog reader at all the old blogs that people don't post on. I came across yours and read through several of the old posts. It was a fun bit of nostalgia. And then here you are with new one :) I hope to be back in Paris again. I wonder how things will have changed since 2012

As always, reading your thoughts about life in Paris is like a warm hug. Although I wish I could go there myself, your musings are the next best thing.