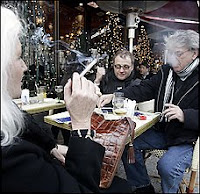 One thing about the cold weather here is that it really exposes cigarette smokers for the addicts they are. Nothing personal, folks, but if you're sitting outside on a terrace when it's below zero, something's wrong. But there is some good news to report. New research released by an international tobacco enterprise has found that cigarette sales dropped to an all-time low in 2008, dropping 2.3 percent. Some 54.4 billion smokes were sold in France in 2008, compared with almost 85 billion in 1998. This same report, however, points out that the statistics can be a bit misleading since this accounts for only cigarettes sold, not consumed. It seems that cigarettes are a popular tourist purchase; one in four cigarettes smoked in France last year was bought abroad, mainly in Spain, Luxembourg and Belgium.

Roselyne Bachelot, minister of health, isn't resting on her laurels in response to this news. She announced earlier this week that she'd like to put graphic images of organs affected by smoking on cigarette packages by the end of year, in part because the current warnings, (which include "smoking kills") haven't had much impact. Predictably the tobacconists' confederation is crying harrassment. Stay tuned for developments; what could be a nicer addition to my blog than a full color photograph of a diseased lung?

P.S. Happy birthday to my favorite ex-smoker.
Posted by Anne at 10:00 AM

Email ThisBlogThis!Share to TwitterShare to FacebookShare to Pinterest
Labels: smoking

So glad to have found your blog.
You remind me a little of myself when I first moved to Paris years ago. I have since moved back to the States, moved to Seoul, South Korea and am now moving back to Paris pour l'amour.

I was just in Paris to celebrate the New Year among other wonderful things and yes, I had never experienced a cold such as the one that attacked me as soon as I hopped out of St. Paul metro to enter the apt. I thank God for thinsulate! However, as long as you're in love (with a man who smokes!) then you can survive any cold, non?

I will be in Paris soon, perhaps we can meet sometime?

It reminds me of when I lived in NY and they banned smoking in most businesses, so you would see the smoking business people outside in the middle of the winter, freezing, but yet having to puff away during their coffee breaks.

If you need a picture of a diseased lung, maybe you could use mine. My COPD has progressed rather rapidly in the past ten years.

@bastille: What is thinsulate?

Thinsulate is man-made insulation used a lot now in clothing. My coat from J.Crew has it and I love it. My coat is very elegant AND keeps me warm without being bulky or heavy.

you're quite welcome Starman

I can hardly wait to find my apt. in Paris!