You Can Go Home Again (Sort Of) 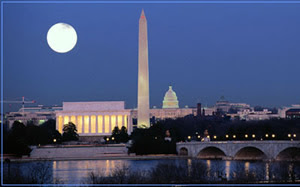 We're just back from a 10 day trip to the U.S., our first trip there since arriving in Paris in August 2007. In the run up to the trip, I was wondering what would feel different...would it be the big cars, the fact that everyone would be speaking English, the character of our neighborhood? But as it turns out, going back home was pretty much like putting on an old shoe. Sure there were a few changes here and there, but overall, it just felt comfortable and familiar and like we could slide back into our old life without missing a beat. Between a week in Washington and three days in Missouri, we saw a lot of friends and family, ate way too much of the foods we miss, and let the kids overdose on American TV. The salted butter caramels, soaps, scarves, and Eiffel Tower keychains were a big hit with those who received them, and we stocked up on gift wrap, printer ink, and Trader Joe's black bean dip, among other things. DC was still thick with Obama bumper stickers and yard signs and all abuzz about the upcoming inauguration and just how the town will manage with up to 4 million visitors. And I only wish I had had my camera with me when we went by the Vice President's residence and saw the truck marked "Mid Atlantic Shredding."

We drove past our house in DC, the one where we lived for 8 years before coming to Paris. It was ours but not. On the flight back, the kids said they were eager to get home. Where was that, I asked? Paris, they replied. It was a great trip but clearly we're not ready to go back to the country we will always call home just yet.
Posted by Anne at 7:30 PM

Email ThisBlogThis!Share to TwitterShare to FacebookShare to Pinterest
Labels: travel outside France

Sounds wonderful - I am glad that home still feels home but that the adventure is not yet over!

Good to know that there are Americans who consider Paris their (2nd?) home.

Will be back to read more.