An Afternoon at the Races 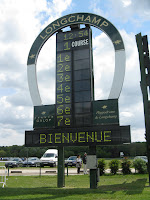 It was a beautiful afternoon at the Hippodrome de Longchamp yesterday, first time I had ever been to the races. (The closest I'd ever been before was getting stuck in traffic before the Preakness parade in Baltimore.) And how lucky we were to go with a group guided by Gina Rarick, a former writer for the International Herald Tribune, turned horse trainer. She explained it all to us, shedding light on everything from how to read the program to making sure we knew which older man in the group of owners was the Aga Khan. I had no idea the track was so big (despite having been by there many times before -- on foot, on a bike, and in a car), that the saddles were so diminuitive, that the jockeys sometimes don't have any experience with a horse before race day, or any of the differences between the sport in France and in the U.S. We watched four races and got a peek behind the scenes at the jockeys weighing out after the race, the horses being led around the presentation ring before, and even a look at the stables and training area.

The minimum bet at Longchamp is 2 euros and with my ignorance, I wasn't even willing to risk that. But there are races there again next Sunday (the 23rd) for those who are more game. And visit Gina's Web site at http://www.gallopfrance.com/ if you want to learn more. 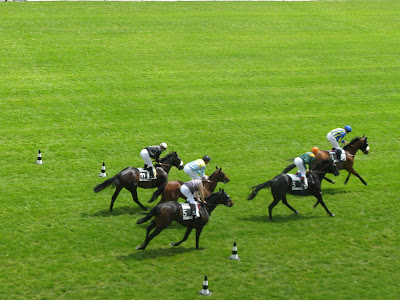 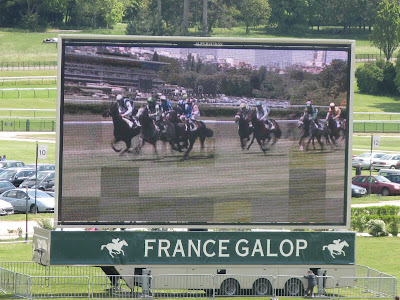 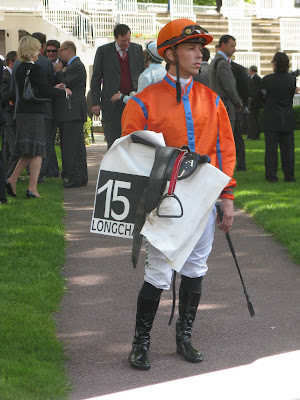 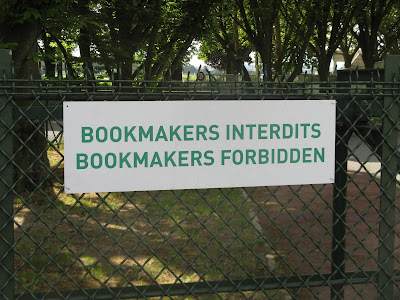 Thanks to Mark for organizing.
Posted by Anne at 8:04 AM

Email ThisBlogThis!Share to TwitterShare to FacebookShare to Pinterest
Labels: sports, things to do in Paris

What's the Aga Khan?
I say just pick a name or colour you like and hope for the best!

One of the richest men in the world! Or as Wikipedia tells us:

Prince Karim Aga Khan IV is the 49th Ismaili Imam, tracing their lineage to Ali, cousin of Muhammad, and his wife Fatimah, Muhammad's daughter.[2] The title His Highness was granted by Queen Elizabeth II of the United Kingdom in 1957 and His Royal Highness by the Shah of Iran in 1959[3]. On July 11, 2007, Aga Khan IV completed 50 years of the imamat of the Ismaili community.

The Aga Khan, heir to the family fortune and a society figure, is founder and chairman of the Aga Khan Development Network, one of the largest private development networks in the world. AKDN continues to work with a variety of African and Asian countries to improve living conditions and promote education. For instance, in Afghanistan the AKDN has mobilised over $750 million in development projects.[4] In 1979, the Aga Khan also established the Aga Khan Program for Islamic Architecture at Harvard University and the Massachusetts Institute of Technology to promote the study of Islamic art, architecture, urbanism, landscape design, and conservation - and the application of that knowledge to contemporary design projects.[5] The program engages in research at both institutions and students can graduate with a Master of Science of Architectural Studies specializing in the Aga Khan program from MIT's Department of Architecture.

I used to be a regular at the three horse tracks and several dog tracks and the Jai Alai Fronton here.