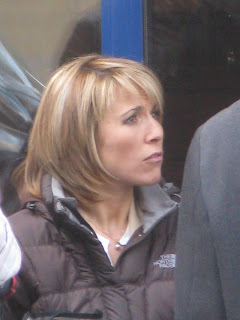 Things are feeling pretty glam in the 'hood with yet another film crew at work this week, this time on a made for TV film to be called "Un bébé pour mes 40 ans." It's got a made for TV theme too -- a successful career woman starts fainting every time she sees a baby. Eventually the diagnosis becomes clear: she has a repressed desire to have a baby! (Now who would have imagined that!) Hilarity ensues as she seeks to have a baby by the time of her 40th birthday. The star is Belgian actress Natacha Amal whose hair has gone from dark brown in all her publicity photos to the dangerously striped blond here.

Watching the crew at work was pretty much like watching paint dry; the scene being shot involved the leading lady and another character sitting outside in a cafe and there seemed to be more re-applications of lipstick than actually filming. On a day that was probably much colder than suggested by the script (the coats went back on between takes) so the extras planted in tables by the window inside were probably getting the best of it.
Posted by Anne at 7:53 AM

Having to shoot summer scenes in winter is one of the big problems I would have with being an actor or a model. Why do they do that?