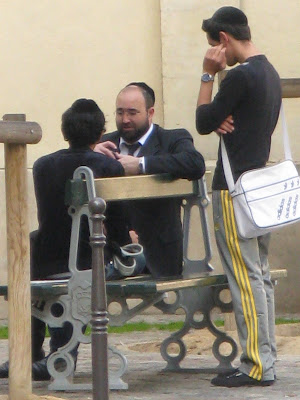 Jews worldwide are currently observing the 10 days of awe that come between Rosh Hashanah, the Jewish new year, and Yom Kippur, the day of atonement. The history of the Jewish people in France is as long and as checkered as it is everywhere else in western Europe. A synagogue was in existence on Ile de la Cité as early as the 6th century; the years since have been marked by periods of expulsion, exclusion, return, and integration. Fully one quarter of France's Jews died during the Holocaust. Since then, the numbers have rebounded somewhat, particularly given the influx of Jews from North Africa.

Today, there are more than 600,000 Jews in France, of whom 375,000 live in Paris. This puts France in a distant third position (behind the U.S. and Israel) in the number of Jewish residents. I often see older men of the Orthodox sect, wearing black suits and brimmed hats, as they go about their business in the Marais quartier. But I've never been bold enough to take a picture. I caught this group, somewhat less traditionally attired, from quite a distance. Maybe they realized I was snapping them but maybe not. In any case, a sweet new year to all.
Posted by Anne at 8:15 AM

Thanks, and Shana Tova to you too.