A as in Apple 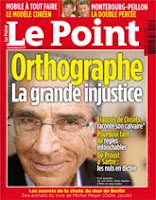 If you ask Americans about what they consider national passions, they might say NASCAR, baseball, backyard barbecues, or even complaining about whichever party is in control of Congress. Ask them about the subject of spelling, and you might hear reminiscences about an elementary school spelling bee. No way would they put national passion and spelling in the same ballpark, much less the same sentence. But this week, the cover story of the weekly magazine Le Point is all about the French obsession with correct spelling. Much of it is devoted to excerpts from the new book, Zéro Faute, in which writer and TV producer François de Closets comes clean on his own miserable performance in spelling and that purely French exercise, la dictée. Closets argues for reform of the rigid system of spelling, explaining that spelling and pedagogical methods must evolve with the language and also that talent in spelling is predictive of nothing more than well, talent in spelling. Heresy? Perhaps. But my guess is that only an icon like Closets has half a chance with the educational establishment and the guardians of the French language. And since my spelling in French is the pits, I'm with him all the way.
Posted by Anne at 8:30 AM

Well, it's a complicated issue in my opinion.
On the one hand, the French language and its spelling are frozen in time because of the French Academy and various "French language protectors" and as a consequence, French doesn't evolve naturally.

On the other hand, any written language requires a standardized spelling (but it must not be frozen), and concerning being able to spell correctly, De Closets is in a minority as poor spelling usually (but not always) reflects poor education and a poor ability to shape clear thinking.
Don't get me wrong, poor spelling don't cause those, it's more of a symptom.

been reading your blog for some time and really enjoy the posts. i am the worst speller in french and english, work in the education field and have a good education...i like to think some just don't possess this academic strength. yet i have an excellent memory for detail... go figure!

As a friend used to say..."That is "K" like in knight" when she was spenlling her last name.

It matters not, for outside of a lack of electricity, the future is (for better or worse) a world of ubiquitous cameras and recorders. All but the most elite academics will have moved to various forms of media to communicate, text is dying. Although it doesn't suit my old-fogey sensibilities, I am kind of sad that I might not live to witness the Guttenburg (youtube?) of the new communication, or Shakespeare.

It's too bad their passion doesn't extend to correct grammar.