Lifestyles of the Rich and Famous

This past weekend marked les Journées du Patrimoine, the one time each year when some of the most amazing buildings in Paris (and actually throughout France and the rest of Europe) are open to the public. We went whole hog our first year here, standing in line for close to four hours to get a glimpse of the Palais de l'Elysée. Call me jaded, spoiled or just plain overprogrammed but it was the best I could do this year to roll out the door mid morning Sunday to see the Grand Hôtel d'Estrées, the residence of the Russian ambassador to Paris.

The building, constructed in the early 18th century, passed from one French noble to another before being sold to the government of Russia in the 1860s. And it's typical of many of the grand houses of Paris. From the rue de Grenelle, there's nothing to see but a big wooden door. You step through and enter in a cobblestone courtyard, grand but austere. It's not hard to imagine a carriage turning in from the street, the clip clop of horses' hooves, and a flock of liveried servants emerging to greet any visitors.

But it's only when you get inside when you start to appreciate how lavish life must have been: a grand staircase, marble floors, expansive carpets, and enough gold woodwork, crystal chandeliers, and Louis XV encrusted everything to make your head spin. Personally, I was most enchanted by the work of contemporary French artist Paul Flickinger, displayed throughout the residence and in the garden. Hats off to the Russian Federation for preserving this gem of French culture and for so skillfully marrying the treasures of the past with those of the present. 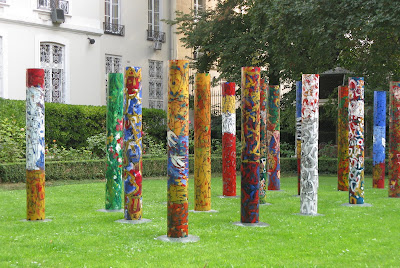 Email ThisBlogThis!Share to TwitterShare to FacebookShare to Pinterest
Labels: history, things to do in Paris

I went there too yesterday afternoon !!!
Pictures to be pubished soon !

I happened to be walking by there on Friday evening and the gates were open. Tried to go in but a very Russian security guy told me to come back on Saturday, which of course I didn't do.

Glad you liked it.